Demonetization In a Nutshell

Demonetization, the word that took the largest democratic country in the world by storm is one every Indian is familiar with at the moment. Narendera Modi, the Prime Minister of India, managed to throw a curve ball at the unsuspecting citizens of the country by announcing that the 500 and 1000 rupee notes would stop being legal tender at the stroke of midnight of 8th November 2017.

Fairly enough the public panicked, but as the reasons for this sudden move were brought into light, they magnanimously started cooperating with the government.

SEO – A Quick Introduction to the Term

SEO or Search Engine Optimization started gaining popularity as search engines started gaining a foothold in the online world. There are millions of websites on literally every single topic you could think of right now. These websites have to compete to push themselves forward to ensure they remain in the search engine user’s eye.

Also Read: What You Should Do To Stay On The Top Of Google Rankings

This is where SEO comes to the rescue. It ensures that your website is seen as a credible source of information by the search engine. This is done by creating unique content at a fast pace to keep your viewers glued to your website.

There are several factors that need to be considered when a website undergoes search engine optimization, like :

As the website gains popularity, its page ranking also improves making it an authority in its field, which leads to more sales, which is ultimately the goal of any business.

The Correlation Between Demonetization and SEO

Let us delve a little deeper as to how this was brought about:

According to the Prime Minister, demonization became the necessity of the hour with the excessive black money present in the economy. With the secrecy cloaking this strategic move, the government was able to round up the culprits who had been hoarding money under false pretenses.

By the stroke of midnight of 8th November 2016, all the 500 and 1000 rupee Indian currency notes lost its value. Citizens were allowed to exchange their old notes for new ones at banks and post offices around the country, but plenty of stringent rules were placed, making it difficult for the black marketers to exchange their money without being caught. 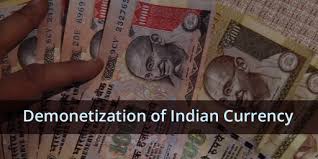 Similarly, SEO came into the virtual world at a time when thousands of websites where being launched every day, placing the user in a baffling situation. They were at a loss on how to identify legitimate websites from the unreliable ones, which website could they put their trust in?

SEO came to the rescue, by weeding out irrelevant websites users were able to search for information with more confidence and save plenty of time as well.

The RBI has stated that demonetization has helped bring about transparency to precisely every business run in the country, especially due to the push virtual transactions were being given. Even small business owners started embracing the virtual world of making payments, making it easier for the government to keep an eye on the transactions occurring. The social media was flooded with images of small shops and traders putting up signs indicating they accept virtual payment, helping our country India take a significant stride into the digital age.

As SEO started being implemented by all business platforms along the virtual world, it gave the smaller companies a chance to compete with the larger organizations as well. This had not been possible before till SEO entered the scene. SEO pushed companies to offer unique content to the viewers, to ensure they keep coming back and push up the page rankings.

At the end of the day, demonetization and Seo serve the same purpose – make the lives of the people easier in every way possible. SEO has already shown its results in the past few years, now let us hope demonetization can also claim the same level of success in the near future.