Without an iota of doubt, the two stalwarts of social media are Facebook and Instagram. Though Facebook bought the latter, technically making them the same company, there is a difference between the two. Those variations stand out, particularly when a brand is leveraging the two to promote themselves. It is why a lot of businesses get confused about which networking site to use when creating their SMM strategy.

To help you with the decision, we explain the three main differences between Facebook and Instagram. These differences aid in making a more informed choice.

Also Read: Tips On How To Use Instagram Marketing For Business

The most significant variation between Facebook and Instagram is the kind of people who use it. By knowing what age group and gender are most often on the platform and then comparing it to your target audience, you can make a better decision on where to focus your efforts.

Pew Research shows that these are the most active demographics on Facebook: 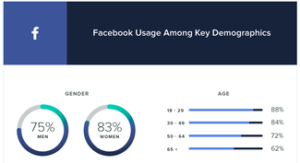 When it comes to the demographic of Instagram, Pew Research shows: 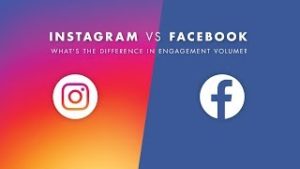 By understanding how the algorithm of the two social sites works, you can evaluate if your content will get more attention on Facebook or Instagram. When Facebook began, the algorithm focused on showing you the images, posts, and shares of your friends. Once the number of users expanded on the network, it changed its algorithm. It is called edge rank, and now it focuses on showing you content:

When Instagram began, the algorithm was chronological. You saw the post of those you follow in the order they were posted. Currently, the algorithm is more complicated. It factors in the engagement with your profile and your past posts besides other aspects.

If you are looking for organic reach for your brand, then Instagram is the better choice because using relevant hashtags and geotags can lead to discovery, which is not equally possible on Facebook. 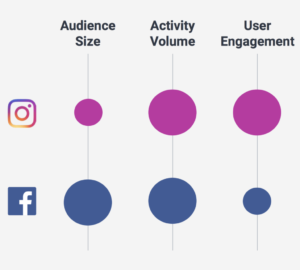 Instagram wins hands down when it comes to user engagement rates. Research shows that a user is most likely to go on a brand’s Instagram page than any other social media first. Therefore, it makes sense to make the best use of Instagram feed, stories and IGTV to increase your visibility and the chance to interact with new and present customers.

While the organic reach and engagement on Facebook are very low, there is a plus point. The ginormous number of users on it. It has the greatest number of active users when compared to other social media, which means that it has the potential for enormous opportunities.

If you want to leverage the power of these users, you have to engage manually. Here are some tricks for better Facebook marketing:

In Conclusion…
On paper, Instagram is the clear winner, especially for a business whose target audience is younger because it has higher engagement and reaches. But given the sheer size of Facebook, it should not be ignored primarily with brands whose target audience is older.
Irrespective of which platform you pick for social media marketing in Chennai, one rule applies to both. The content you share has to be creative and informative. If you still have a question on which social media to pick, get in touch with us.